I'm not a good writer nor a prolific one. This is one of the reasons why I did not renew my rolandfg.net domain when it was about to expire in the 2007. At that time rolandfg.net had

a good reputation and it had been online for many years, so a spammer registered it to gather traffic for sponsored links.

It all started between the 1999 and the 2000.  I registered rolandfg.net domain and I got a hosting powered by PHP and MySQL. Later on I put together a very simple web-app for publishing content, allowing the visitors to leave feedback via comments.

The site went into several refreshes. The oldest screen-shots I'm able to retrieve from the Wayback machine are dated between the 2003 and the 2004. Some images are missing so the layout results a little bit screwed up. Anyway the main idea is still there. 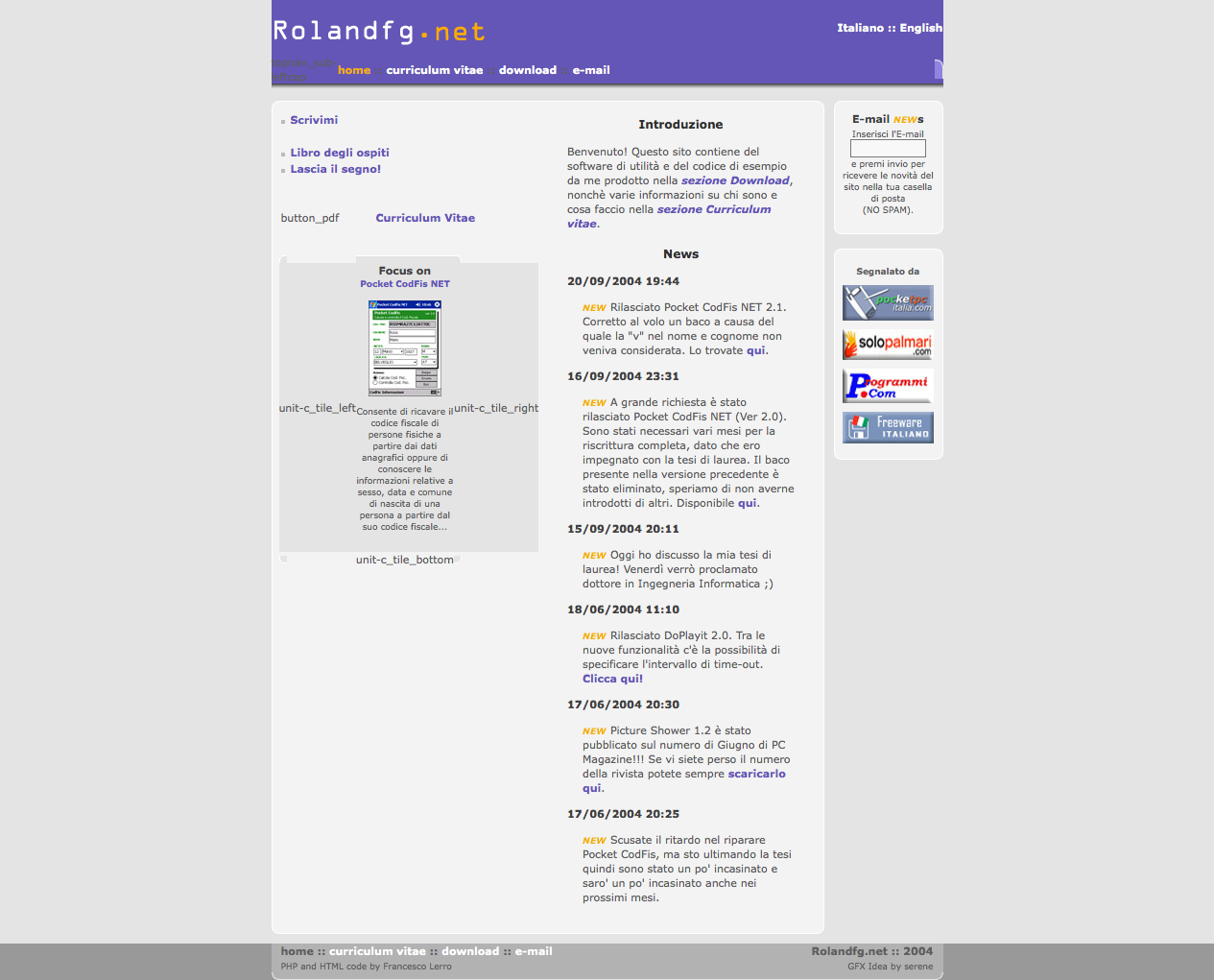 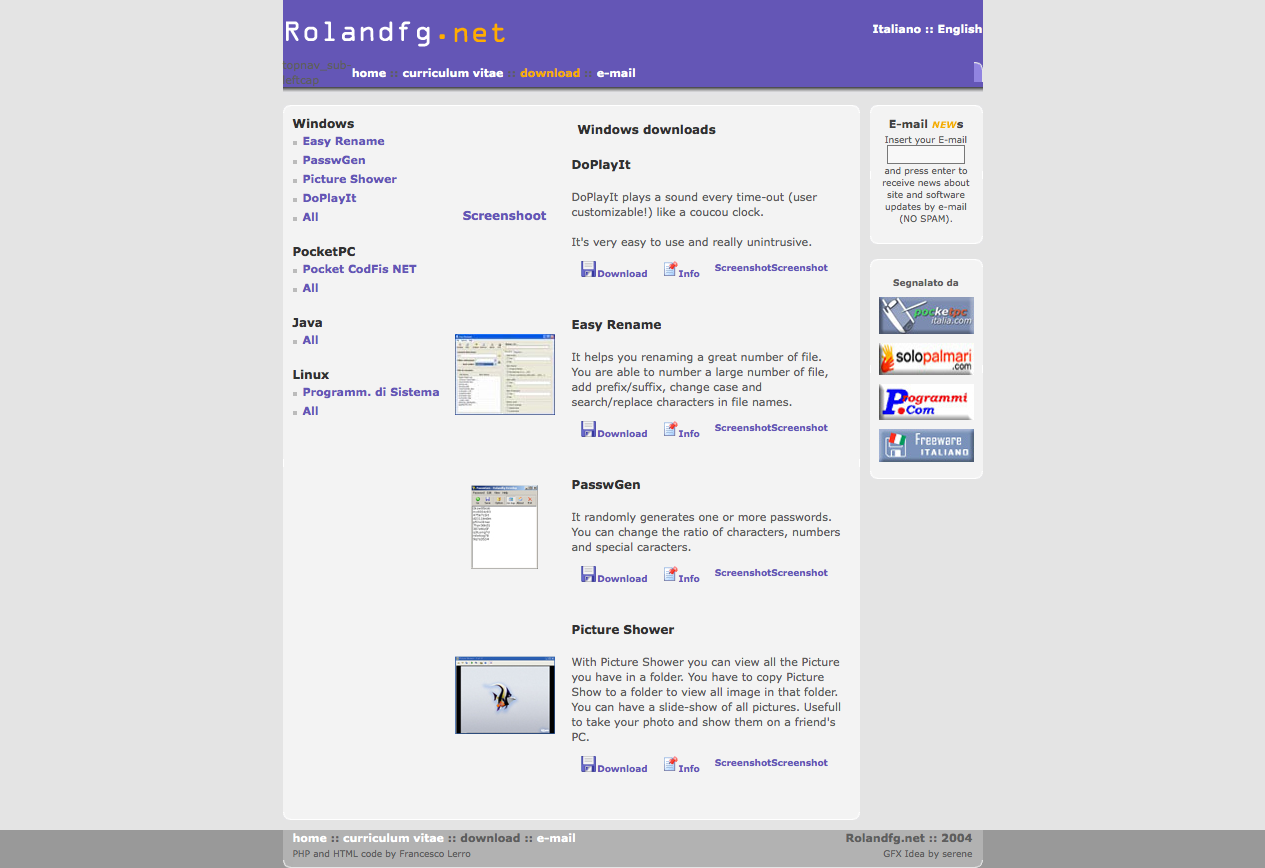 Later on the bunch of PHP scripts had been replaced by a real CMS and I started writing some more personal posts following the write a blog trend. A screen-shot of my blog from 2007 (background-image missing): 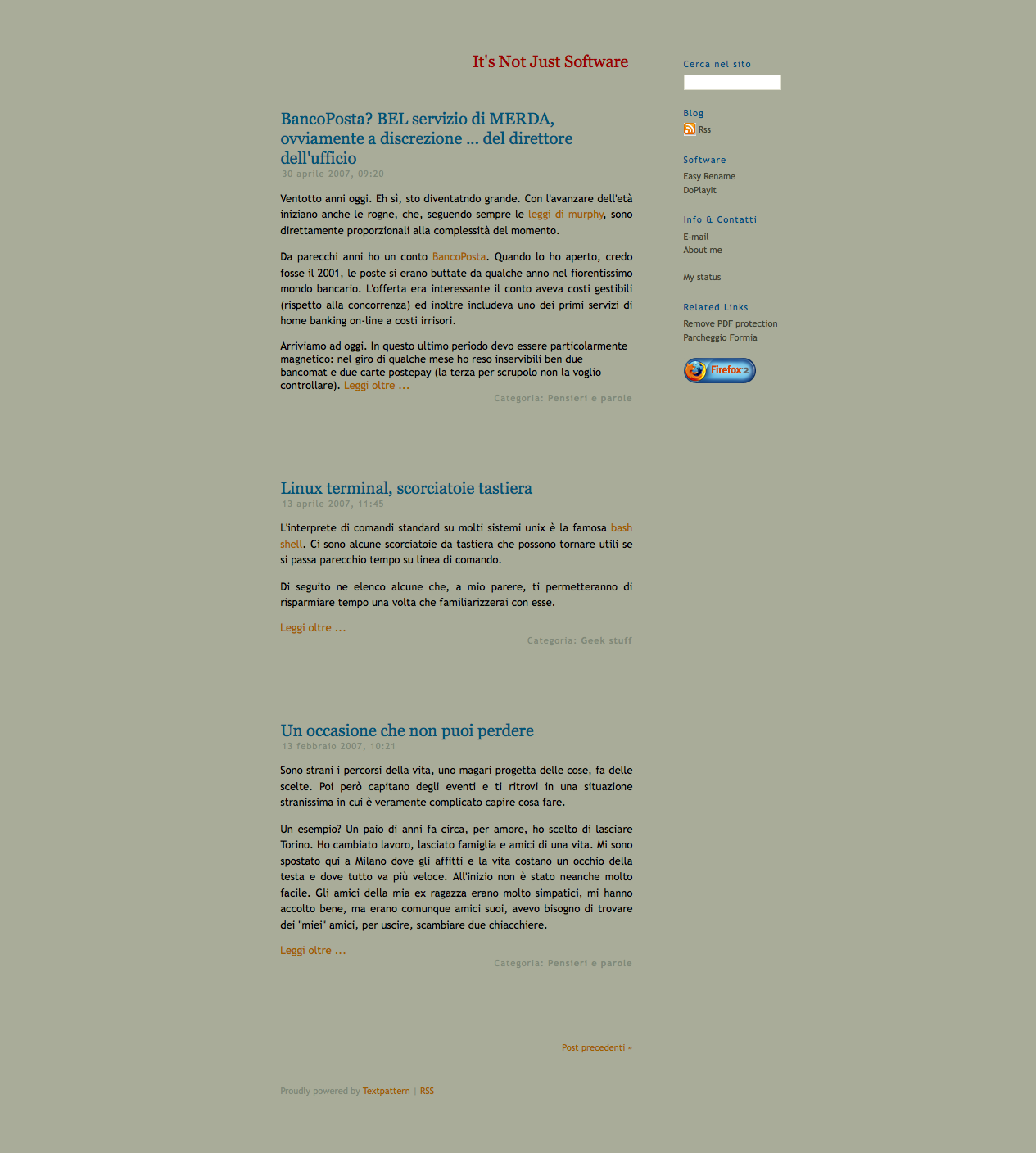 Why I started all that? I felt the need to distribute on the web some software utilities I had developed.

Show/Hide, the first one, was one on the most problematic. The app used the trick of  Control Panel tranformation to make the folder's content inaccessible from the Windows Explorer without a password. The protection was really weak: a power user was able to easily break into the folder via command line or third party file manager (a la Total Commander). Anyway the utility got lots of downloads and was published in an Italian software magazine CD. So for several years I had been receiving funny/desperate emails asking for help (unlock folders after software uninstall, recover lost passwords, etc.).

My master-piece was (a couple of years later) a freeware application for the Pocket PC platform: Pocket CodFis. It was my first approach at building software for mobile devices. I used the .NET Compact framework and the SQLite DB engine. Pocket CodFis was able to calculate a tax code code, called Codice Fiscale, used in Italy to uniquely identify a person. This application had more than 1000 downloads on the first couple of days after being linked on PocketPC italia.

Among others it's worth to mention:

DoPlayIt, an utility that fired an sound at predefined intervals. This software was very simple but, since I received feedback from a blind person that had been using it and that gave me good feedback on how to enhance it for screen reader, I'm quite proud of it.

Easy Rename, a very handy file re-namer, published along with an Italian magazine like Show/Hide.

At present I have a couple of projects that sooner or later I would like to share and even if Twitter and Facebook are trendier than an ‘old’ blog I decided to regain possession of rolandfg.net. We'll see…